Imagine Nicholasville Road is the name given to the city’s study of Lexington’s most travelled corridor. The city hired a consultant to study the full length stretching from the split Upper and Limestone streets all the way into Jessamine county and the shopping center, Brannon Crossing. With the study completed, the consultant has proposed a broad range of recommendations and I was pleasantly surprised by them. The recommendations touch a wide range of issues and fall under multiple governmental bodies, but if we can manage to implement even a fraction of them, it should be an improvement to what we have now.

The first, and most exciting recommendation, was for Lextran and the city to implement a Bus Rapid Transit (BRT) system for the corridor. BRT doesn’t have a concrete definition but the most basic concept is fast, regular buses. This usually results in bus headways (time between buses) of 15-20 minutes. This can be accomplished in a variety of ways, but usually with designated bus lanes, which the consultant has recommended for sections of Nicholasville Road.

Starting after Upper and Limestone join, they propose a center lane, bi-directional bus only lane. This would work similar to how single tracked trains work, there will be center median transit stops where the lane splits into two and the buses would be timed to meet at stations. So there will only be one bus going one way between each station. This bus only lane would continue until Alumni Drive, where it’s hard to tell, but I believe the bus will just join traffic until Southland. From Southland to Moore Drive, there would be bus and right turn only lanes, which have been popping up in major cities for awhile now. 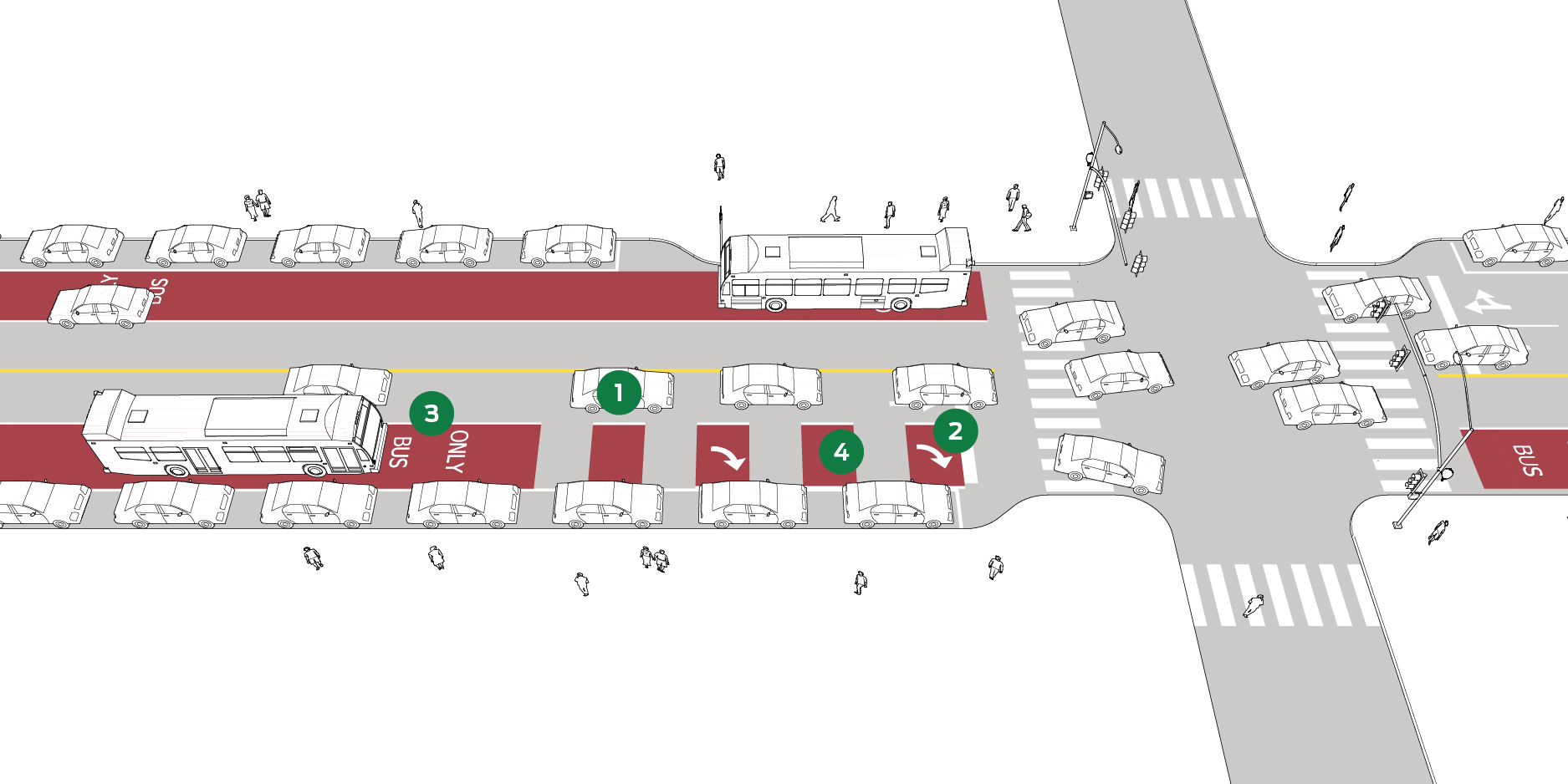 I absolutely love BRT and bus only lanes. Giving buses their own designated right of way is an inexpensive way to approach light rail levels of service and goes a long way to making the bus a reliable form of transportation. I have my reservations about the sections in between where it appears the bus is supposed to rejoin traffic, but with the combination of all the recommendations, maybe it won’t be as much of a problem as I fear it would be.

The next recommendation was for a, takes a deep breath “transit oriented development regulatory framework”. Transit Oriented Development (TOD) is the concept of focusing development around transit stops as transit works better when it connects destinations to other destinations. It’s the flip side of the coin of BRT. If we want people to ride the bus, we need to ensure that the bus takes them to where they want to go (TOD) and can get them there quickly and reliably (BRT). The consultant doesn’t really provide an in-depth description of what they think will work and they specifically call out that the new regulations would have to be worked out in another process, but they do have some great starting ideas. First, as Nicholasville Road is a very long road that crosses through a variety of places, they suggest categorizing the transit stops into 4 categories, Regional Town Center, Suburban Town Center, Neighborhood, and Urban Center. Each of these categories would have their own TOD guidelines, but would have some style of increasing intensity of use in the area immediately around transit stops and having that intensity taper off the further you get from the transit stop.

I’m all for TOD and really think that it could benefit Lexington and Lextran. My only reservations are that the consultant isn’t really clear on what they mean by “regulatory framework” because they specifically call out that it would not be an overlay. I’m a little hesitant to add yet-another-thing that has to be checked before something can be developed. Ideally, it would be up front and clear about what you can do and where you can do it. But I totally agree with the recommendation in spirit, we’ll see if the city starts a new process to iron it out more.

BRT and TOD were the big changes, but to facilitate them, the consultant proposed a bunch of smaller changes.

The bane of everyone who’s every driven on Nicholasville Road, the changing reversible lanes. These are the lanes that change direction based on the time of day. They are confusing and the consultant recommends removing them. I couldn’t agree more. We should have done this yesterday.

The consultant proposes a separated, 10 foot shared use path on either side of the road. This would be a huge boon for pedestrians and cyclists as the road is incredibly dangerous. Even if we just did this one recommendation, it would probably see a drastic increase in pedestrians and bikes using the road, which is often avoided. I’d love to see it combined with raised crosswalks.

One of the big causes of congestion is left turns, as you have to stop traffic coming from the other direction to allow people to turn. Nicholasville Road has a lot of little streets intersecting, sometimes without signals, and this can lead to lots of backups. One of the recommendations is limiting left turns to designated areas, usually major intersections and restricting lots of little intersections with right-in, right-out entrances. While I agree that this would help traffic, I am worried for pedestrian safety as drivers attention is usually focused on incoming traffic, and not pedestrians that may be coming to other way.

Now to the one recommendation that I have the biggest reservations about. While, they did not go into specifics, as each intersection will need its own in-depth study, they propose looking at “innovative intersection designs” for major intersections. I’m ok with the idea of a redesign, but the two types they mentioned worry me. Super Street and Contra Flow Intersections are massive, complicated designs that focus primarily on cars and I’m suspect of the consideration they give cyclists and pedestrians. I mean just look at this thing:

But Will Anything Really Change?

That’s most of the recommendations, but they are just that, recommendations. Implementation depends on Council, Lextran, and KYTC to actually adopt these as the plans going forward. That requires KYTC, along with the city, to work and pay for redesigning the road. It needs Lextran to actually implement a BRT system and it would require the city to adopt some sort of TOD “regulatory framework”. I don’t know what the timeline would be for these changes or even if all groups will agree to implement them but one thing is abundantly clear; Nicholasville Road has lots of problems for lots of people. At least now we have some ideas of how to improve the situation.