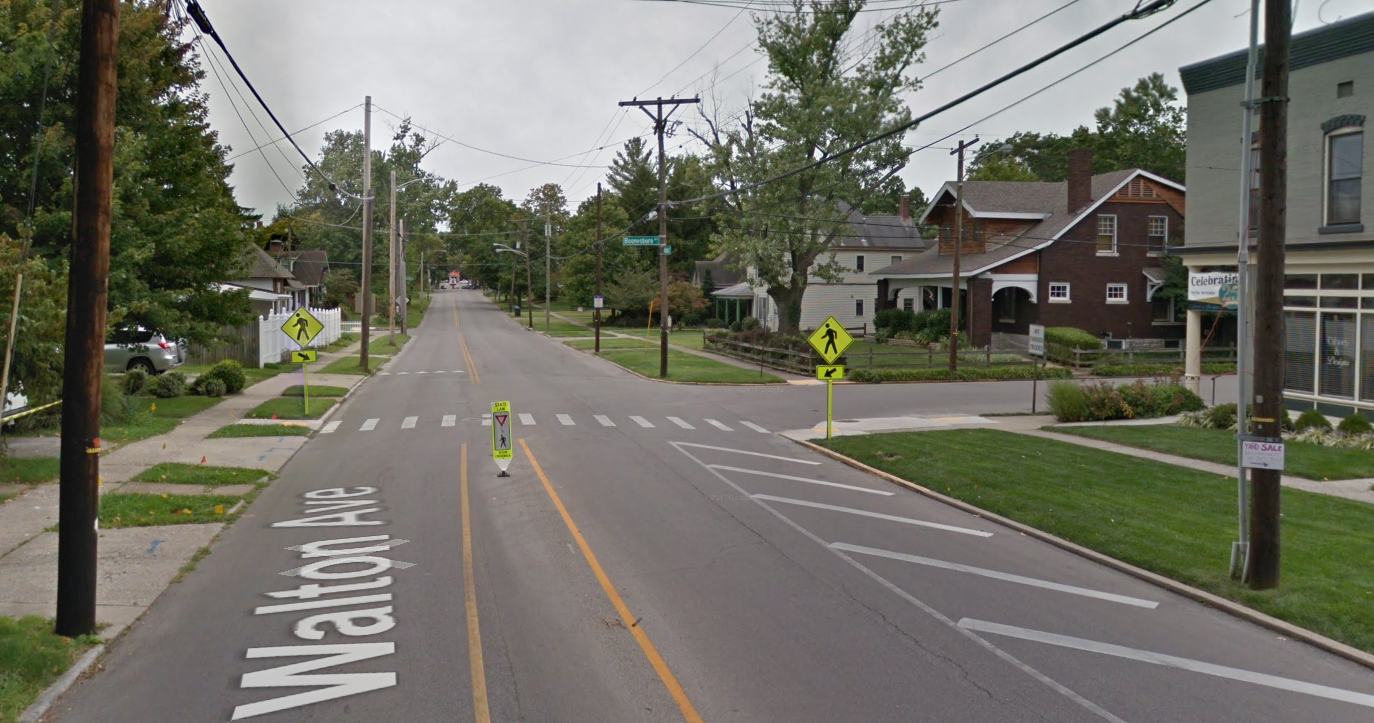 Today I want to look at a bad crosswalk on Walton Avenue at Boonesboro Ave. This is an important crosswalk as it connects the Bell Court neighborhood to retail on National Ave. and connects the Mentelle and Kenwick neighborhoods to Bell Court Park. It’s also a crosswalk that I use fairly regularly and have seen its problems first hand. While it’s significantly better than the nearest other crosswalk at Winchester Rd, it still has it’s issues and is unsafe for pedestrians. Let’s dive into the problem, the city’s failing attempts to try and fix it, and my own proposed solution(s).

The short answer is that the road is way to wide. Wide, straight streets encourage speeding and it’s a problem on Walton. You can tell that the city has tried to address this by narrowing the lane as it comes from Winchester Rd. but this is the traffic engineering equivalent of paying lip service. Paint doesn’t protect anyone and in this case it is mostly ignored. As the street comes from Winchester Rd. it has a gentle curve toward the cross walk. The paint tries to make this a slightly sharper turn, which would slow drivers down if they paid it any attention. Instead, drivers often straddle the line to “straighten” the curve and maintain a high speed. I’ve heard it said that drivers will not yield when travelling over 30mph, and having stood at this crosswalk with a stroller and watched almost a dozen cars whiz by without yielding, I’m liable to believe it.

Previously, there were flags in buckets on each sign, intended for pedestrians to wave as they crossed the road. I cannot think of a more insulting attempt at “fixing” this crossing. If I have to wave an orange flag to cross a crosswalk safely, then there is obviously a problem with the crosswalk. Eventually, the flags disappeared. Whether they were stolen or someone in the traffic department realized how absurd it was, I cannot say. 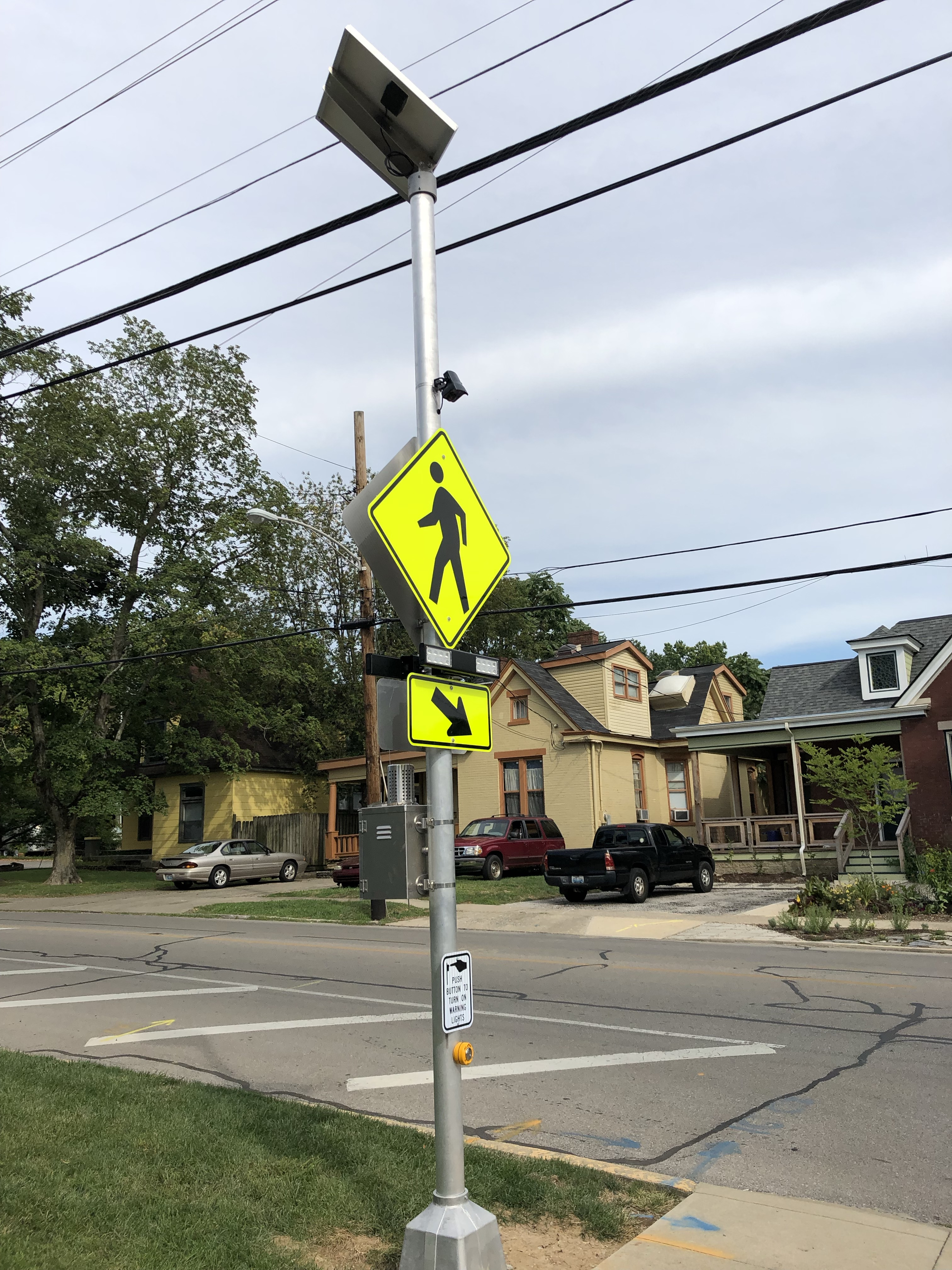 A more recent “improvement” the city has done is to replace the old pedestrian crossing signs with fancier taller ones with flashing lights and beg buttons. They’ve been up for a few months now and they’ve been about as effective as I expected them to be, that is, not very. The lights are not very bright so I doubt drivers notice them during the day. In fact the very first car didn’t yield to my family when we tried to cross. When I asked the city’s traffic engineering department how much they cost, I was told $14,000! That seems like a big waste. But this also misses the actual problem. The problem is not that drivers don’t see all the pedestrian signs, it’s that the road is too wide and they are going too fast to be bothered to yield.

How to improve it

Easy, slow the cars. Ideally, there would be a physical bump out, not just paint, on at least one side. It’s been shown that when drivers feel physically “squeezed” they slow down, and slower cars are more likely to yield. But seeing as building a curb extension is expensive and being a believer in Strong Towns incremental improvements, I would propose an even simpler, and cheaper, solution; floppy bollards, also called traffic delineators, like these:

Just a handful of these, installed on the edge of the lane, would have an immediate effect of slowing the cars and it’s probably a lot cheaper than large signs with flashing lights. Heck, you could probably be even more frugal and just use traffic cones. Here’s a set of four for $50 that could do the job, and I’m sure the city can get them for a better price.

The point is fixing our streets to be more pedestrian friendly does not have to be an expensive endeavor. But we have to make sure we are actually solving the real problem and not just wasting money on non-solutions. You simply will not have bike and pedestrian friendly streets if you still prioritize car speeds.