One simple zoning change that could have big impacts

One thing I try to explain to people is how there can be little poison pills in our zoning ordinance that can hamper good incremental development and enforce the dichotomy of single use buildings or massive multiuse buildings. A good example of this is Lexington’s P-1 Professional Office zone. The name is self explanatory, but this zone is meant for general offices like banks, medical offices, and pretty much any sort of desk job, but it also includes day cars and barber shops. It even allows residential which seems like it would work out as a nice mixed use zone. But there is one small condition on dwelling units that kills small projects and essentially guarantees that any development in a P-1 zone will be small offices or large apartment buildings with offices on the ground floor. Here’s the text in question under Permitted Uses:

At first glance it seems rather innocuous, but let’s use an example of an existing building on Walton, which is not zoned P-1 but right next to a strip of properties that is zoned P-1.

As it stands now, if you had a property zoned P-1, it would be essentially impossible to build this building if you wanted offices on the ground floor and an apartment or two above.

It appears to meet the zoning codes, so what’s the hold up? The problem comes with ADA compliance and financing. Newly constructed multifamily buildings must comply with the ADA, specifically all “public” areas, which in our case would be a shared entrance. For a building to be considered “accessible” under ADA, 100% of it’s ground floor units must be accessible. If there are no residential units on the ground floor, the lowest floor with residential units is considered the ground floor for the purposes of accessibility. So this means that in our example above the second floor needs to be 100% accessible. Which means an elevator. Which means it won’t pencil out. No one can justify an elevator for a two story building with all of 2 apartments at most.

Why not just build a bigger building?

So if a small building doesn’t make financial sense, why not a big one? Let’s look at some of the areas around downtown that are zoned P-1. 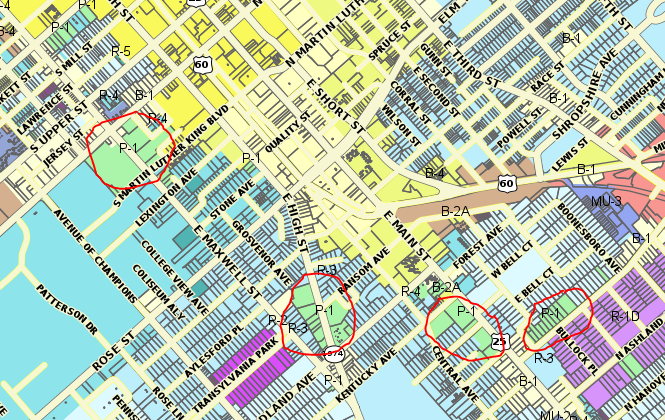 You can see on Walton the strip of P-1 properties next to our earlier example. This is right between the Bell Court neighborhood and the Ashland/Mentelle neighborhoods. There is absolutely no way those neighborhoods will allow anything over 2-3 stories to be built without a substantial fight and substantial cost in time and money. Same goes for the cluster of P-1s near Woodland Triangle and at Main and Kentucky. Personally, I understand that, it would be a drastic change to the existing streetscape to build anything higher (except maybe near the Woodland Triangle), and overall goes against my desire for incremental development and gentle density.

So what’s a property owner/developer to do if they want to redevelop the property? As it stands now, they would either have to build a one story, single use office building or fight and push through a multistory building that would have to be large enough to justify the cost of the elevator(s) and the cost of fighting the neighborhood. More often than not it will be the former just because it’s simpler. But it doesn’t do anything to increase density or help in dealing with our housing shortage.

I believe this can be fixed in a simple way that has been used by other cities and small developers; Allow residential units on the ground floor to mix with the office space. Here is one example, touted by the Incremental Development Alliance called the “Form Follows Finance” Fourplex: 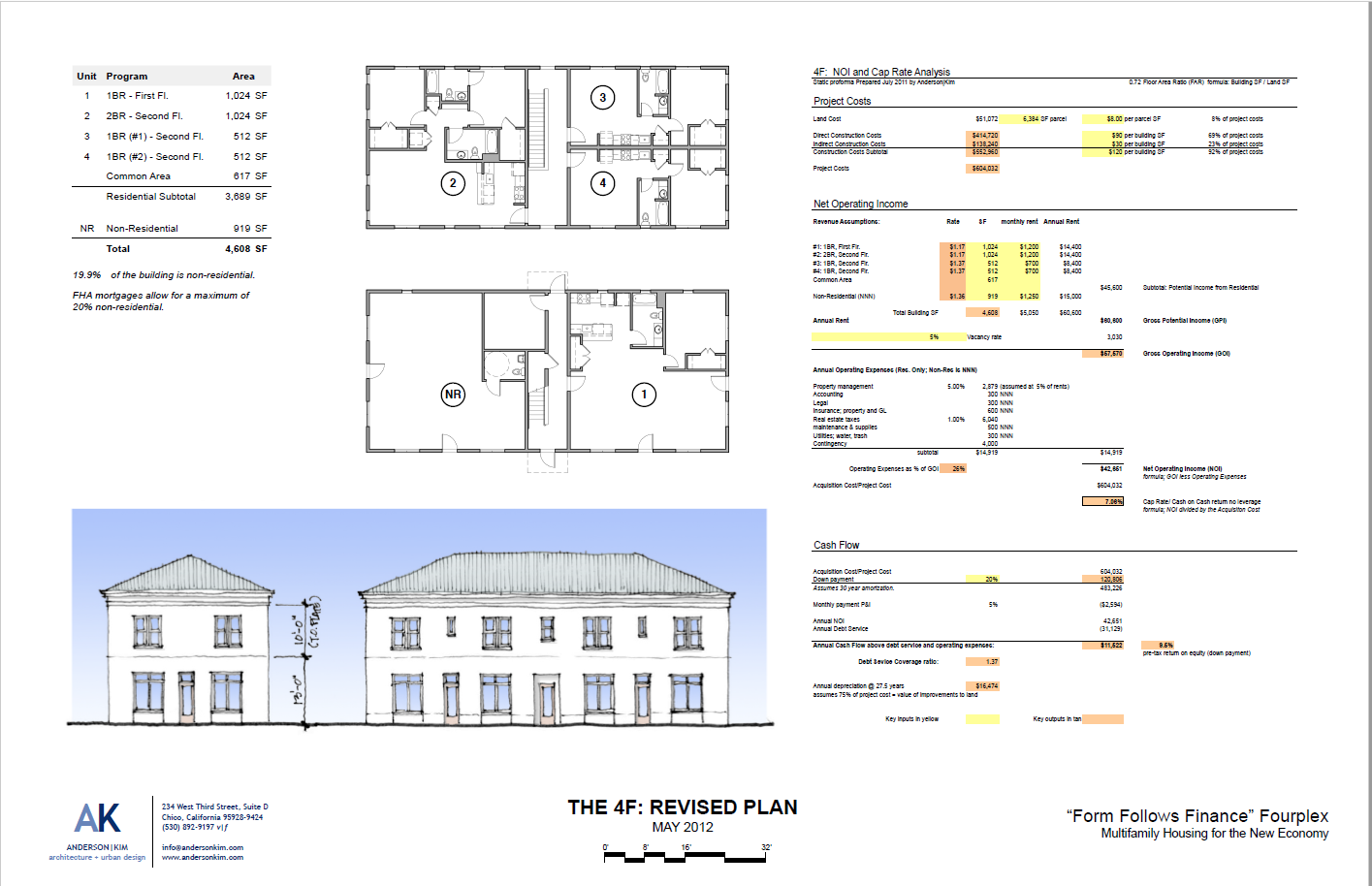 This is a fourplex with 3 residential units and one commercial/office unit and it has been specifically designed to meet ADA as well as mortgage requirements. Yes, you can get a federally backed mortgage to buy/build this, because it meets the criteria to be called a house. This allows it to be affordable for smaller developers. More importantly, it’s less likely to catch flak from neighbors, or at least less flak, due to it’s relatively small size. It wouldn’t be out of place in any of the P-1 zones on the map above, or most Lexington neighborhoods for that matter.

This goes to show how relatively small tweaks to our zoning code can open up a ton of possibilities for better incremental development. Development that more people can take part in, that adds more housing, and that is relatively unobtrusive. If we want to see more of this kind of development, we have to update our zoning ordinance to allow them.