Why are Lexington's roads so unsafe for pedestrians?

2018 has been the deadliest year for Lexington pedestrians since the city started tracking in 1996. 14 Lexingtonians have been killed by cars while walking. Unfortunately, the police and local news stations have approached this with the usual narrative: victim blaming. The city’s own traffic data page that has a section specifically for Pedestrian fatalities lists “Dark clothing / not visible” as “collision factors” for 4 of the incidents, which, last I checked, was not illegal. So obviously to alleviate future incidents we should immediately have council institute a city wide dress code for anyone on a sidewalk. Preferably, they should be required to wear a hi-vis vest as to give drivers the utmost consideration.

Sadly, many people will not see my sarcasm until the hi-vis vest part. For many people who have grown up around car dependence, when looking at any one instance of a pedestrian collision, they go the easy route and say something like “they weren’t at a crosswalk”, which often ignores a lot of context. There are numerous reasons that someone crosses outside a crosswalk. Maybe they’re old, it’s over 1000ft to the nearest crosswalk, and it’s cold out. Or the bus drops them off and their job is about to start on the other side of the street. Regardless, jaywalking should not be a death sentence.

When I defend pedestrians, many will assume I’m trying to assign blame to the drivers, which isn’t the case. Sometimes the pedestrian darts out without looking. Sometimes the driver is speeding. But most of the time the road and environment are designed in such a way that almost ensures that a collision will happen eventually, usually because it gives hardly any concern to pedestrians. Here are some anecdotal examples of poorly designed local streets that are either unsafe for pedestrians or encourage unsafe behaviors:

I live in Kenwick, on Richmond Ave, and one of the local amenities that we and our neighbors enjoy is Ashland, the Henry Clay estate, with its grounds that many use for walking and jogging. Now, according to Google, it’s about 1100ft from the corner of Richmond Ave. and Richmond Rd to Ashland (the estate). Problem is, there aren’t any crosswalks across Richmond Rd for that entire stretch, even though multiple streets connect to it. So what’s a law-abiding pedestrian to do? Cross at a crosswalk of course! And the nearest crosswalk is about… 1185ft away… in the opposite direction. So to legally get to Ashland (the estate) from Richmond Ave I would have to walk north all the way to Ashland Ave, cross Richmond Rd, then walk 2275ft back south. That’s over TRIPLE the distance I would have to walk if I just jaywalked. Is it any wonder that I see so many people jaywalking on a regular basis? 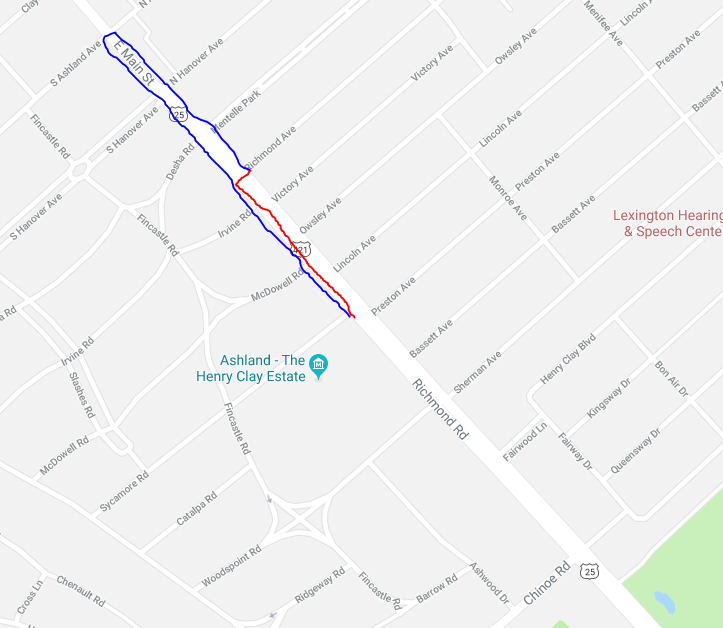 The intersection of Main and Midland (and Vine) is often regarded as the beginning of downtown. Which makes its current state even more of a travesty. The intersection is a prime example of putting cars’ convenience over even the most basic pedestrian considerations. The problem lies with it’s right turn lanes (and left from Vine to Main). They are what’s called ‘slip lanes’ and you can see one of them in the Streetview below. 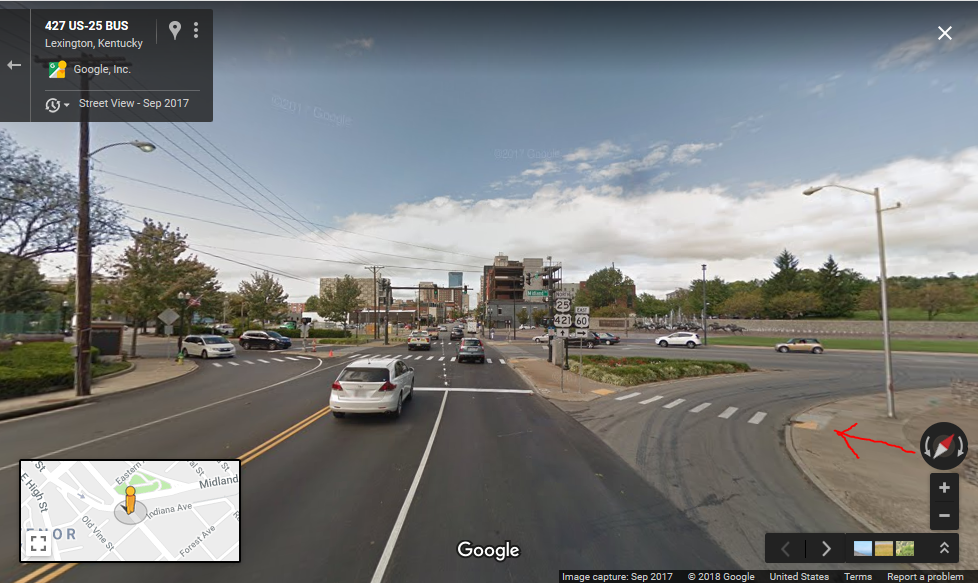 Slip lanes are, according to Wikipedia, “a road traffic lane provided at an intersection to allow vehicles to turn at the intersection without actually entering it and interfering with through traffic. It is therefore not controlled by any traffic signals at that intersection.” So it makes turning easier and avoids the main intersection, thereby make traffic flow smoother. Well, vehicular traffic.

The problem is that last section about no traffic signals. What that translates into is that pedestrians have to wait for an empty street or a generous driver who actually yields. It’s a particular problem on Vine St side as, due to Vine St’s width, it encourages speeding, so drivers rarely have much time to look for a pedestrian because the intersection comes right after a curve. Personally, I’ve stood on the corner and watched 4 to 5 cars blow by me without the least consideration.

The intersection also suffers from a problem that most of our downtown streets suffer from:

One way streets are terrible in numerous ways, but are particularly bad for pedestrians. One way, multi lane streets encourage speeding as Jeff Speck lists in his book “Walkable City Rules”; “First, due to that lowered risk of head-on collisions. Second, because a street with many lanes in the same direction just feels like a highway. Third, because a choice of lanes provides the opportunity to jockey.”

Other than speeding, another problem with one way streets is one I’ve personally experienced; drivers looking only at oncoming traffic when turning. Since traffic only comes one way, drivers often only pay attention to where the traffic is coming from and not to pedestrians who may be coming from the opposite direction. I even had to slap the hood of one lady’s car because she was rolling into the crosswalk to turn while looking the other way.

Don’t jump to blame the pedestrian

Any one of these issues can be brushed aside with a simple “Follow traffic laws”. Pedestrians should cross at crosswalks, regardless of how inconvenient or incredibly out of the way they are. Drivers should yield to pedestrians, even in slip lanes, and drivers should always look both ways before turning out onto the street. The problem with those simple responses is that they try to bend people to follow the environment rather than have the environment built around how people behave. People will want to cross the road more frequently than every 1000ft. Drivers will continue to follow the flow of traffic even if a pedestrian is waiting to cross and drivers will pay more attention to big metal boxes coming towards them than the one or two people slowly coming the other way.

So next time you see in the news that a pedestrian was hit by a car, before writing it off with a “They should have been in a crosswalk”, take a moment and “zoom out” and look where they were hit. Was the crosswalk really far away? Is the road poorly lit and designed for cars to move fast? How long does it take for the signal to cycle? And, most importantly, ask yourself if we could do better.